When I publish this final post of ‘London 2019″ I will have landed safely at SFO.

I’m writing it, though, over the arm of the Atlantic that separates Greenland from Canada – the map calls it the Labrador Sea south of our route but we’re probably over Baffin Bay since we’re approaching Baffin Island.

Long westbound daytime flights are disconcerting. We started off from London at 11:35 a.m. and will land in SF about 2:45 p.m. The trip takes about 11 hours, through eight time zones, all in broad daylight; closer to midwinter it would be night here, well north of the Arctic Circle. The passenger behind me reached through to close my window shade; apparently the low sunlight was too much for him.

I kept stealing peeks anyway as we flew over Iceland and the Greenland ice cap, but the cloud cover below us, and a strange haze around us, blocked the ground until just as we crossed the west coast of Greenland.

I don’t know if this picture is alarming or normal: more rocks than ice are visible at the shore and inland at left, even this far north: 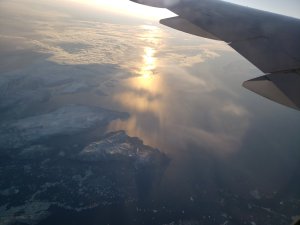 From this point our “great circle” route curves back south across Canada and home.

And that’s the end of this trip. Karen continued from London on to Venice for the Biennale; you can follow her adventures there on her Facebook page.

I’m staying indoors today, mostly. Tomorrow I fly home and I’m trying to speed up my recovery on this fourth day of my cold, both for my own comfort and that of other passengers seated close enough to notice my massive consumption of tissues.

Farewell dinner tonight with Eleanor and a friend of hers. Tomorrow Karen’s off to Venice for the art Biennale; I wasn’t going anyway but am now especially glad I made that decision.

I’m feeling better but still mainlining tissues for my cold. I ventured out once today with Karen, to the Royal Academy of Art on Piccadilly for a show of the self-portraits of the modern English painter Lucian Freud. That was it for me; I bailed on the test of the day’s touring, taking this photo of the Royal Academy facade on my way home so you wouldn’t feel left out: 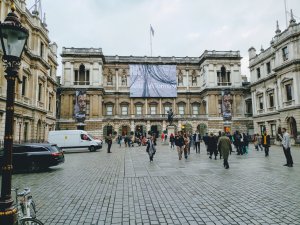 And yes if you were wondering, there had been a bit of rain.

This will be shortest post so far this trip, for the longest span of time: two days. I woke up yesterday morning with a roaring cold – yes, I’ve had my flu shot and it wasn’t that. Karen left me with some cold meds and headed out at my request to sightsee and keep our date with Eleanor for dinner and Death of a Salesman (Eleanor found a third to take my place). I did my usual hibernation cure aside from brief forays for food, more meds, and tissues. I was determined to recover enough for tonight’s planned music at St. Martin-in-the-Fields. So, no photos yesterday.

Today I stayed in until mid-afternoon, still using Kleenex by the bushel but some cough syrup Karen had brought home last night seemed to deal with that symptom.

We started at the National Portrait Gallery; I made it through the pricey and for me uninteresting special exhibit of Pre-Raphaelite women (for many of the paintings the women weren’t the artists but the models, lovers, “muses,” and husband-swapping wives). I ran out of gas and spent the rest of our time there on a bench.

For dinner I insisted on the cafeteria underneath St. Martin’s, in honor of today’s date – zoom in a bit and you’ll understand why: 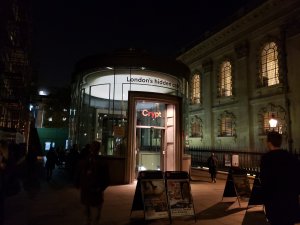 The eatery was actually cheery and we both liked the food: 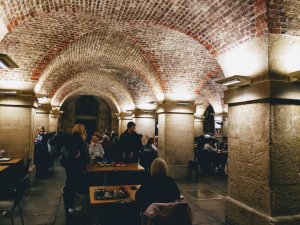 The concert of choral music was breathtaking, especially Allegri’s Miserere and Fauré’s Requiem, done by a choir of just 10 wonderful singers, with the organ serving as orchestra for the Fauré. The Parry in the middle of the concert I could have done without. No photos, of course, but here’s the space where they mostly performed. Note the interesting pattern of the window (you’ll want to zoom again). The white blur isn’t a reflection but part of the design: 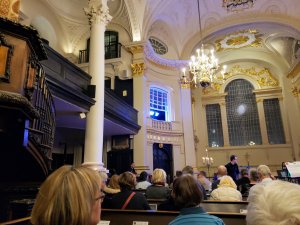 Tomorrow I hope to be over the cold.

We walked to the Bankside pier beside the Tate Modern this morning for what turned out to be a round-trip ride downriver to Greenwich on the River Bus boat service aka Thames Clipper. The sights were spectacular despite a gray day, so again I’ll let the pictures tell most of the story:

We stopped at a nearby pub for fish and chips. Returning to the pier on a riverside path we were caught by the waves of an unusually high tide and decided to go home and dry off rather than continue sightseeing. Our last pause on the walk home was this historic marker at the original location of Shakespeare’s Globe Theatre: 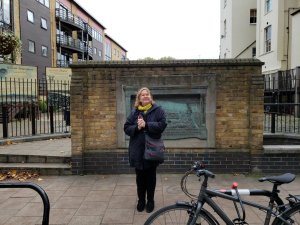 …more art. And another play.

We headed back to the Tate Modern museum yesterday morning, not much more than 5 minutes’ walk from our apartment, this time to see their permanent collection. The highlight for me was a dimly lit roomful of huge, unusually dark-hued Rothko paintings. A sign explained that the artist was inspired after viewing Michelangelo’s Laurentian Library in Florence and intended them to be displayed in a darkened, almost claustrophobic space. He donated the entire set to the Tate: 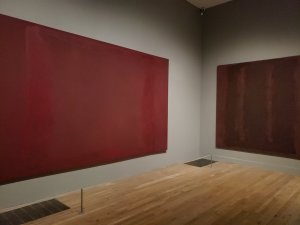 Karen then led me to the 6th-floor cafe for a cup of tea and a spectacular view across the Thames and the Millennium Bridge to St. Paul’s Cathedral… 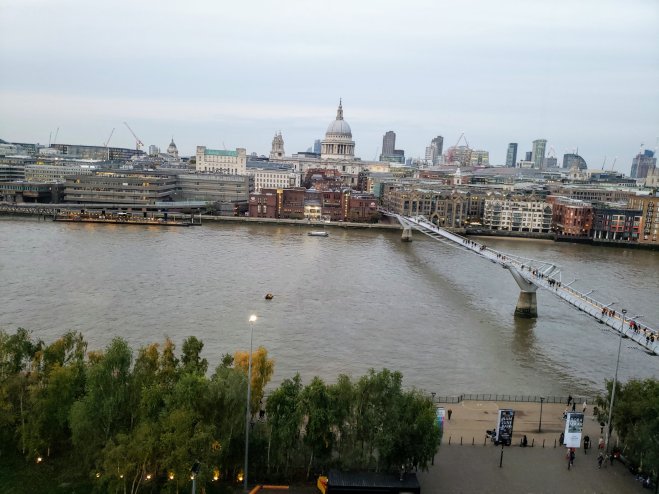 …and the new skyscrapers north of the river as dusk was gathering: 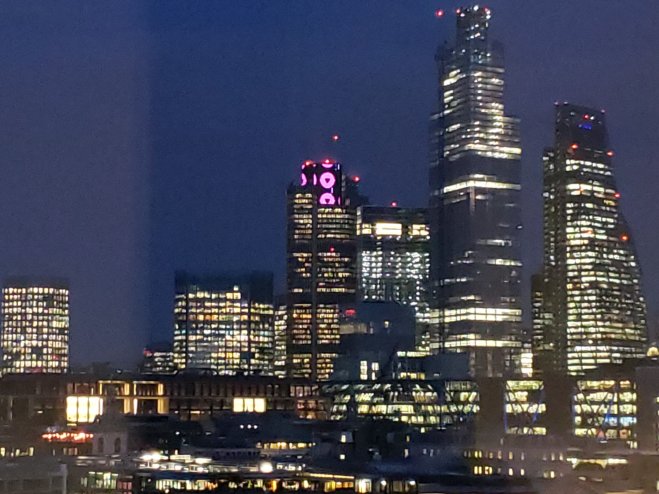 We stayed at the Tate Modern until closing time, then walked upriver to the National Theater for our second play there, “Translations.” It walked the line between romantic comedy and tragedy as an Irish village meets British redcoats maybe 200 years ago and tries to figure out if they are friends or the end of their way of life. Here’s the set in the Olivier Theater before the play opened, a house with implied walls, surrounded by moorland that was mostly in darkness throughout the play: 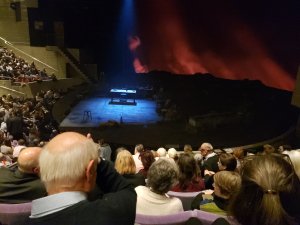 Today was my first visit to Cambridge; Karen lived there for a college work semester and has visited at least twice since.

Today’s visit was a patchwork. We started off with a sandwich and a pair of lectures at the Union, perhaps a prototype for college student unions in the U.S.

The event was “Sunday Papers Live, Cambridge Edition,” part of a series of such events around the UK.

The afternoon was to consist of half-hour segments framed as live versions of newspaper sections. After “Culture,” a young singer-songwriter, came “Business,” a PowerPoint talk by a Polish scholar from a UK university about how advertising in the “Mad Men” era subordinated women, who were almost nonexistent in the business, and of how much progress has been made since then (not much, really).

Next came “World News,” a calmly stated but passionate presentation by an American-sounding Iranian-born journalist of the story of adolescent women recruited from Arab and European countries into ISIS, many of whom are now detained in camps in northeastern Syria after their sisters either died during the final battle to liberate the area from ISIS or have since been accepted back into their home countries. The remainder and their children are now in a dangerous limbo with no sign that the world is moving to resolve their status.

Both speakers have recently published books.

Next came a break for Cambridge on Foot, a brief walking tour of a small part of the town and the University that seems to be most of its life.

After about a half-hour, as the tour wended back toward the Union, we slipped away for “Karen’s tour”: the bookstore where she worked in 1970 when it was still independent:

…the market square, and punts being poled up and down the Cam River: 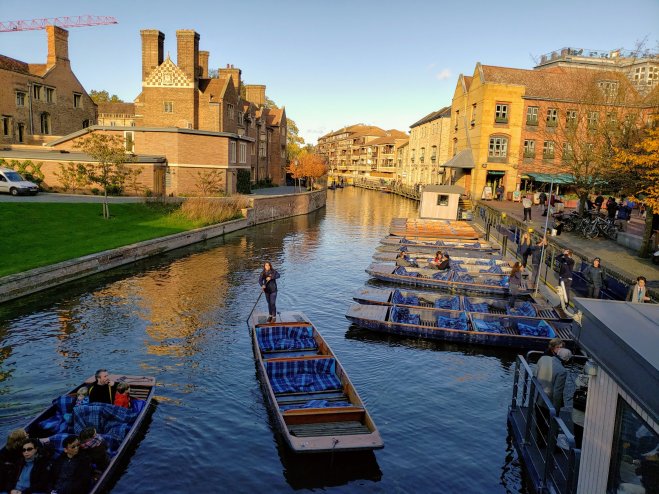 We ended up at one of Cambridge’s oddest attractions: Kettle’s Yard, the home of an art collector who filled his house with works by famous and unknown artists, many of them friends of his, then donated it all to the University. Here is a window decorated by a guest artist last year for the reopening of the house after a major renovation. 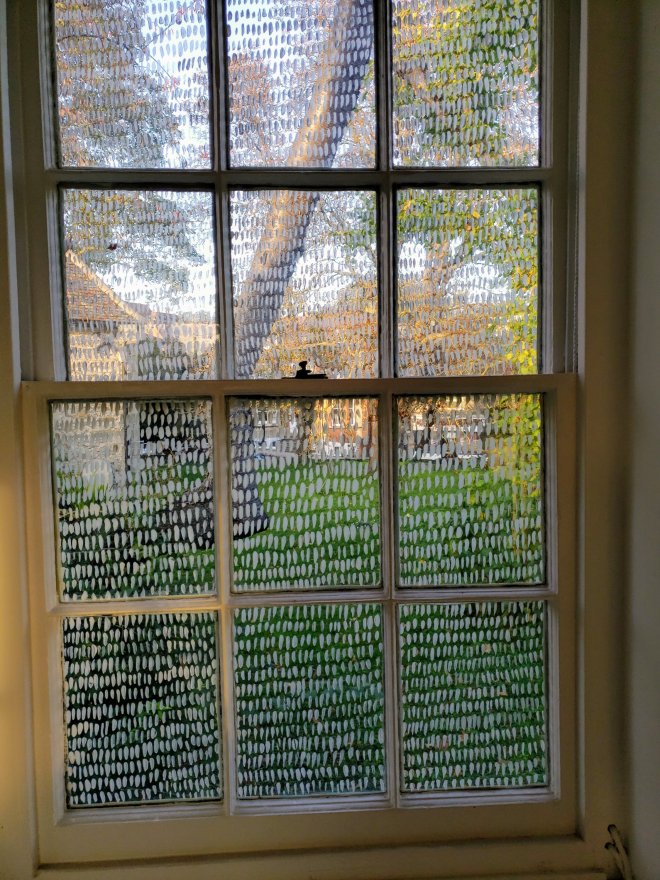 We never did make it back to the Sunday Papers.